Keep It Together is a game about your body. Your body is ghastly and rotting. It makes others hate and fear you, and even try to kill you. It changes without your permission, forever, until like Theseus’ ship you are a whole different thing from what you were. It fails you when it matters most.

Keep It Together is a game about your body. Your body is resilient. It is changeable, and you can make it your own with effort. It lets you express yourself when words fail. It is yours, and you don’t need anyone else’s permission for it. Don’t forget this.

Requires one six-sided die and one eight-sided die, or a random number generator.

In order to download this game you must purchase it at or above the minimum price of $5 USD. You will get access to the following files:

How many players does this game support (or recommended)? Can it be played solo?

Hey there! It could absolutely be played with 2+ players! Didn't build Keep It Together with the intention of solo play, but could also see someone doing that (as long as they're cool with GMing/setting up situations and complications themselves, since the game currently doesn't have a mechanism for generating those).

Oh wow... for what seems like such a simple pitch - zombie splatterpunk from the other side - you get a really intriguing game.

No messing around. Get this.

Finally, someone did something clever with zombies!

Keep It Together is a pulpy zombie rpg that digs into the complexity of being a still-living corpse.

It's 5 pages, with an excellent, clean, and visually cohesive layout.

Mechanically, it's played with a d6 and a d8. The d8 is used to pass checks by rolling at or under a target number. Target numbers are between 1 and 6, and depend on where your limb is. More on that in a second.

As a zombie, your body has slots. Each of the six slots can mount a limb, and where the limb is mounted determines the difficulty of checks associated with that limb. So, for example, your 6 slot is easy to roll under, so if you mount a head on your 6 slot, communication will be an easy task for you.

You can lose limbs, and this cuts down on the kinds of tasks you can attempt, but gives you a bonus per empty slot on certain kinds of aggressive actions. You basically become faster and more dangerous as you shed your encumbering limbs.

When you take damage, you roll and lose a random limb. If there's no limbs in the rolled slot, you die. When you die, you can come back at the end of the scene provided any other party members survived.

I'm dwelling a lot on the mechanics here, but that's because they're genius.

Story-wise, Keep It Together is a bit stranger.

It's not quite body horror. It's definitely not a comedy either. There's significant irreverence to it (rules-wise you can swap out your genitals for a chainsaw,) but it's unexpectedly grounded too.

The GMing section contains a lot of guidance on different possible stories you can tell with the system, from simple B-movie-from-the-zombies'-side-of-things combat scenarios to more complex explorations of the past and attempts at building a new civilization for the risen dead.

Advice is also give on how to check for topics your group might want to avoid---although I think it's worth having safety tools on deck for this one as well.

Overall, if you like pulp and zombie horror and want to look at it from a new angle, or if you like incredible mechanics and want to see what a game can accomplish with just two dice, I'd strongly recommend this. If body horror isn't your jam, this is likely not your game. But if you want to run this a little lower on the ESRB scale, I think it's moddable, and the genitals limb location could be safely replaced with 'torso' instead. 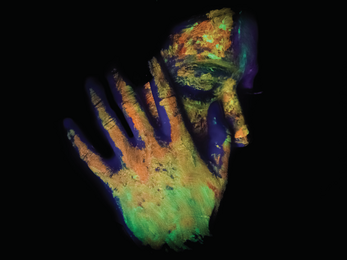